Sorry, you need to enable JavaScript to visit this website.

What is the Ease of Doing Business Score?

The primary objective of the Doing Business North America report is to provide a measure of the ease of doing business for cities in North America. At least one city per state or province was scored. The District of Columbia was included as well. For states with much larger populations than average, more cities (up to four of the largest in the state or province) were included. The Ease of Doing Business Score is derived from a summation of the scores awarded in each of the six categories measured by this report. The Ease of Doing Business Score focuses on the regulatory burdens a small- to medium-sized business would face from the birth of the business to the death of the business in cities across North America. The following explains the process of arriving at the final score. 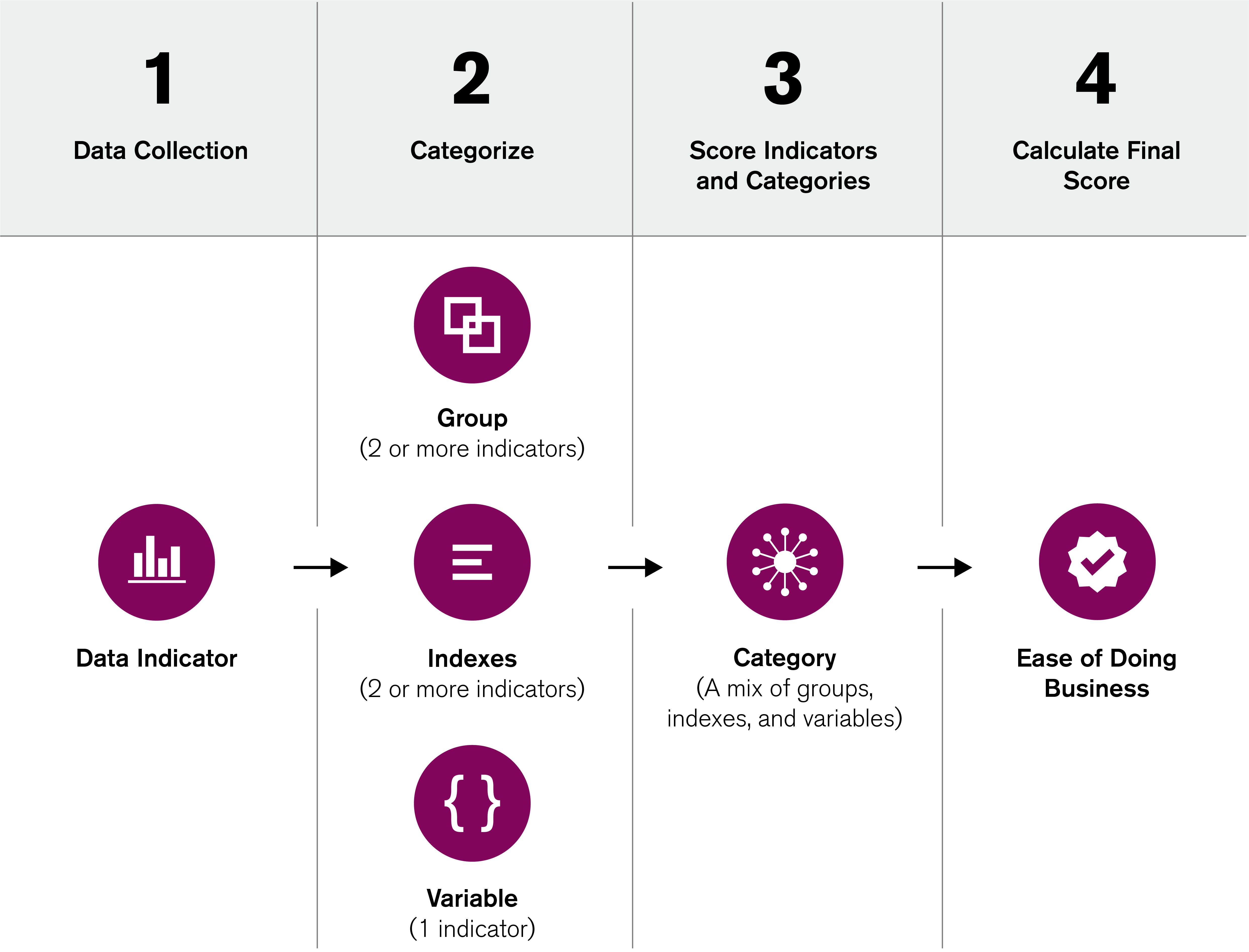 Steps 1 and 2: Collecting and Categorizing the Data

The "Doing Business North America" team collected data on 111 different regulatory and economic indicators across six different categories. The data collected came entirely from publicly available sources, including many published by the municipal governments we studied. Each observation is termed an “indicator.” Once collected, these indicators were then classified into one of three types: (i) a variable, (ii) a group, or (iii) an index.

Groups consist of two or more indicators that share similar attributes that can be combined. When combined, that group is considered a variable in the scoring process. An example of this can be seen in the Employing Workers category, in which there is a group of indicators measuring severance pay for workers with different tenure periods: There is an indicator that measures severance pay for workers with one year of tenure, an indicator for severance pay with five years of tenure, and an indicator for severance pay with 10 years of tenure. Because these three indicators all measure the same thing (but simply measure different time ranges) and all are measured using the same units, these three indicators are grouped together (in this case, averaged together) and then treated like a variable for scoring purposes. A group is the rarest collection of indicators found throughout the data.

Indexes are a collection of indicators (similar to a group) that share a theme. However, there are two important conditions that must both be met for a collection of indicators to be treated as an index instead of as a group: (i) the indicators are binary in nature; and (ii) on their own, they do not rise to the importance of a variable but grouped together they describe an important element of the Ease of Doing Business analysis. An example of this can be seen in the Land and Space Use category, where there are several indexes used in the Quality of Land Administration Index, which itself is comprised of the Reliability of Infrastructure Index and the Transparency of Information Index. This transparency index measures various attributes of the land administration system, such as whether information on land ownership is made publicly available (a “yes” or “no” answer) or whether the agency in charge of immovable property registration commits to a specific time frame (a “yes” or “no” answer). These two indicators are grouped together to form an index. Additionally, indexes can be combined to form an even broader index as described above for the Registering Property category.

Step 3: Scoring the Indicators and Categories

The indicators are scored following one of two procedures, depending on whether the data type is binary in nature (which is collapsed into indexes) or continuous in nature (which becomes variables on their own or combined in groups). Indexes and groups are also scored.

Binary indicators are the simplest of all the indicators. These indicators measure whether a policy exists. Locations where that policy exists are marked as 1 or “yes,” and locations where the policy does not exist are marked as 0 or “no.” Next, we determine whether the policy is harmful or beneficial to the ease of doing business — in other words, we decide whether a “1” or “yes” should be considered the best score or the worst score. So, for instance, if a policy is considered beneficial, locations with this policy (observations that are labeled with a 1 or “yes” in the data indicator) are awarded one point, and locations without this policy (locations that were labeled with a 0 in the data indicator) are awarded zero points. A collection of binary indicators can then be combined into an index by simply adding the ones and zeros to create the index score.

Once a specific numeric range and directionality have been established, a city’s score for that indicator is determined using the equation ((A-B)/(A-C))*10), where A is the lowest observation (or “lowest performer”) for an indicator, across all locations, B is the observation for the location being scored, and C is the highest observation (or “highest performer”) for an indicator across all locations. This calculation produces values within a range of zero to 10, where the location(s) with the lowest regulatory performance (or those outside two standard deviations from the mean) are awarded no points, and the location(s) with the best regulatory environment are awarded 10 points. Cities in between the top and bottom receive scores based on their relative position as defined by the equation — where they end up in relation to the “frontier” of the highest-ranked indicator value. This “distance to frontier” equation and scoring method for continuous indicators can be applied to all types of indicators.

This “distance to frontier” method is also used when scoring groups. The difference is that, after deciding the directionality, the sum of all indicator scores within the group is first divided by the number of indicators included in the group, producing an average for that group. Then that average is scored based on the group’s distance to the frontier using the formula above.

Indexes are scored in a similar fashion. The top and bottom values are assigned and the numeric score is calculated using the “distance to frontier” formula.

To generate a score for a particular category, the scores among all variables, groups, and indexes within the category must first be aggregated. That aggregate score is then divided by the total number of indicators. This creates an average for the entire category. The average value for a category is used so that locations with missing or incomplete data are still able to be ranked and scored in a similar fashion to those with a complete dataset and not penalized by lack of data. That average value is the category score.

The Ease of Doing Business Score is derived by averaging the indicator scores across all categories. Any effect of missing data is significantly reduced at this level of aggregation. This number is then multiplied by 10 to allow the final score to resemble a percentage (i.e., out of 100%).